A lot of dog owners consider cooking for their pet instead of constantly relying on store bought food like kibble. The advantages are numerous. Cooking for your dog is not only a way to provide him with a perfectly balanced (and tasty) diet, it can even be a way to save money.

However, it’s not as simple as giving your puppy a bowl of whatever you’re having for lunch. There are a few rules that you need to follow if you want your pet to be healthy and happy. 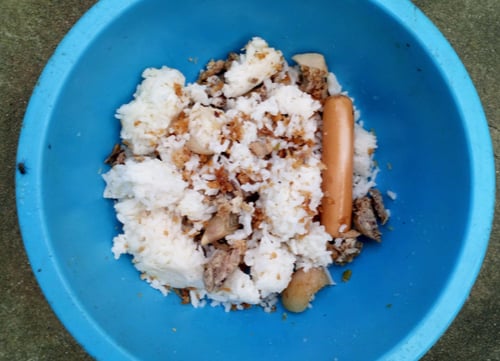 1. Avoid Ingredients That Could Be Dangerous

Just because a dog would eat something, doesn’t mean that you should let him. And we don’t just mean obvious things, like garbage or your shoes. There are plenty of foods that are perfectly safe for human consumption, that can make your dog sick.

The big one that most people have heard of is chocolate. Chocolate and other cocoa products contain theobromine, a substance with a stimulating effect. Depending on the quantity, it can cause digestive issues such as diarrhea and vomiting, and in more serious cases seizures or even death.

Other foods that are toxic for dogs include onions and garlic that can lead to anemia, grapes and raisins, which might cause kidney failure, and macadamia nuts which can be fatal even in small quantities. Before you start cooking for your dog or even just giving him scraps from your table, make sure you educate yourself on the full list of foods that are toxic for dogs. 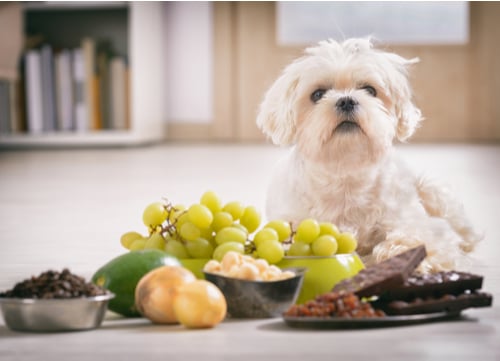 The opinions on feeding your dog raw foods are divided. The consensus seems to be that it’s mostly okay, but with some precautions. After all, you’ve probably seen him eat much worse.

In their essence, dogs are carnivores, and their digestive system is built to handle eating raw meat, so, while there is a chance of E. Coli or Salmonella poisoning, it is minimal. However, raw meat and fish always carry a risk of parasites, so make sure you only give your pet fresh food, bought from a reputable source.

Buy smaller quantities instead of getting it in bulk and letting it sit in your fridge for too long, and wash your dog’s bowls regularly. For your own safety, wash all of the surfaces you used, as well as your hands, every time you handle raw meat. Raw eggs are also relatively safe for dogs, but keep the consumption limited. Too many can cause a biotin deficiency, so stick to one or two per day.

While maybe not the tastiest option, store-bought dog food is usually balanced in a way that meets the dietary requirements of a healthy dog. If you take it upon yourself to cook for your dog, it’s important that you strive to strike a similar balance.

Not every meal has to be equally balanced – instead try looking at the big picture on a weekly level. In general, a half of your dog’s diet should consist of protein from meat, fish, eggs and dairy. The other half should be a mix of raw or cooked vegetables and fruit, and some starch and carbohydrates.

Fats should be present, but in small amounts. Dogs also need calcium. Bones have traditionally been a favorite source, but they can actually be dangerous. Not only do they pose a choking hazard, but they can also splinter easily, and injure your pet’s gums, stomach or intestines. It’s generally considered much safer to just opt for a calcium supplement.

4. Watch Out for Spices and Seasonings

When cooking for your dog, forget about human notions of what flavorful food is. Dogs are not only perfectly content eating food that we might find bland, it’s actually even better for them. In most cases, foods that people eat are way too salty for dogs.

Dogs are much more sensitive to salt than we are, and too high consumption can lead to tummy problems, excessive thirst and even dehydration. Spicy foods may cause similar problems, although dogs don’t really perceive the taste of spicy foods the same way we do. Spices like paprika and pepper can also cause skin and eye irritation, which is another reason to avoid them.

Finally, avoid giving nutmeg to your pup at all costs. While its aroma may seem heavenly to you, it’s been known to cause severe abdominal pain in dogs, and, in some cases even death. Many other herbs and spices are completely harmless, but because dogs have a much more developed sense of smell than we do, a dog might just refuse to eat a meal because of the aroma of a particular spice. 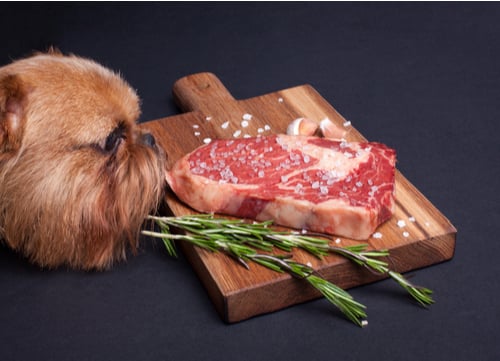 Just as there are certain foods that should be avoided at all costs, there are others that are actually amazing for your dog’s health. In general, foods that are high in protein make an excellent choice, whether as part of a full meal, or just as a snack. This includes dairy, like yoghurt and cottage cheese, unless, of course, your dog is lactose intolerant.

Dairy is also a good source of much needed calcium. However, always remember to read the ingredient list, and choose products without added sugar or sweeteners. And don’t overdo it – excessive dairy can cause digestive problems.

Peanut butter is a great protein and fat-rich snack, but it should be given in moderation, as an occasional treat. Salmon and other oily fish is not just full of protein, but also rich in omega-3 fatty acids – which are beneficial for the heart, kidneys, bones and joints, and many other aspects of your pet’s health.

Finally, fresh fruit and veggies, like carrots, asparagus, pumpkin and spinach are an invaluable source of nutrients, while also being good for the teeth and crucial for digestion thanks to their fiber content.

Just like humans, dogs need variety in their diet to ensure they get all the nutrients they need. If your dog suffers from chronic health problems, consult your vet before switching to homemade meals.